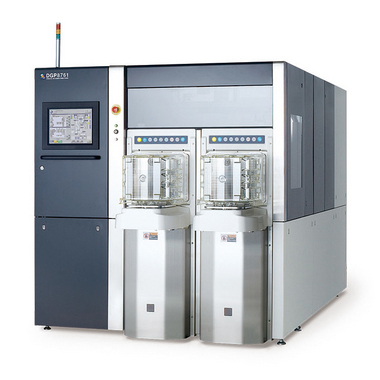 Realizes improvements in process stability and higher throughput
The DGP8761 is the successor to the DGP8760, which is used by premier manufacturers worldwide. It integrates backside grinding and stress relief processing and performs stable thin grinding to thicknesses less than 25 µm. The DGP8761 is equipped with a newly developed spindle to support high-speed grinding. This contributes to a shorter thin wafer processing time (compared to the DGP8760). In addition, an optimized handling layout shortens the cycle time (not including processing time).

Realizing configurations which provide a gettering effect on the Z3-axis
*Gettering: a process which forms a minute destructive layer (gettering sites) inside the silicon wafer. Impurities, such as heavy metals, present in the wafer are captured at these gettering sites.

This is a solution which realizes high die strength and maintains the gettering effect by using DISCO’s unique dry polishing.

System expandability
By integrating the DGP8761 with a multi-wafer mounter, DFM2800, it is possible to support the attachment of DAF (Die Attach Film) for thin wafers. It can also be used in an inline configuration with DISCO’s DBG (Dicing Before Grinding) process.